What about the boys?

Working on Gender and Masculinities with Migrant Youth

Editor’s Note: On December 5-7, 2018, in the City of San Cristobal de las Casas, Chiapas, more than 50 young men and women from Guatemala, Honduras, Nicaragua, El Salvador, Mexico, and the United States took part in the third Transnational Meeting of Migrant Youth, a dialogue space arranged by Voces Mesoamericanas. Voces Mesoamericanas is part of our transnational Gender and Migration Initiative, with support from the NoVo Foundation.

During this meeting, Program Officer Rodrigo Barraza conducted a workshop on gender and masculinities. He described the main objectives: “To build spaces of trust and intimacy between men, critically review our privileges and commit to change our attitudes in order to live and exercise healthy masculinities. We, as men, have much to contribute in the construction of transnational protection and empowerment networks for migrant girls and women.”

This narrative is Rodrigo’s personal reflection, integrating many of the perspectives and voices he heard during the workshop.

How did I learn to be a man you ask me? Well, because of my dad, I think. Since I was very young, he took me to the field to work with him. As I was very small, I just carried the corn, but later my dad taught me how to cut it, how to plant it. At first it was very difficult for me and my parents yelled at me all the time, but later I learned. My dad taught me to work hard and that I have to take care of my family. “That´s what a man does,” he used to say.

My dad was very serious, he almost did not talk to me. He never told me he loved me, or gave me a hug. He told me all the time that men don’t cry. I remember that he always came home tired and yelled at my mom because he was hungry. My mom also helped in the field but she also had to clean and make food for everyone in my house. I did not understand why, but my parents told me that this was the way it was.

Then my dad went north because he said he had to support the family. He never asked for help from me or my bigger brothers. He just packed his things and left. And we never saw him again.

The first thing that we as men did in the workshop was to look into each other’s eyes, and to hold each other. It seems simple but it took us a lot of work. We were ashamed, we felt uncomfortable. But we realized that its ok. That we are not less of a man for doing that. And so, embraced, we share moments of fear, doubt, loneliness. And we realized that these moments are frequent, and that gender is a prison: obligations and stereotypes that prevent us from being free and achieve our full potential.

My sisters were told they had to serve me and my brothers even though they were younger than us. They cooked for me, they clean my mess. Or else my mom hit them.

I started to hang out a lot with other men. With my friends. “My crew.”

We wanted to be with women.  The more we had the better. We used to say awful things to them, we touch them when they passed by our sides. And if one of them responded and said something to us we insulted her. I thought that was normal.  Now that I remembering this, I feel really bad. I am ashamed. I want to cry.

We realized that most of the time men migrate to comply with gender stereotypes: to show strength, courage, decision. And in the case of women, they often migrate precisely to escape those stereotypes. To escape the violence that we men exercise every day against them. And we, the migrant men, understood that we ourselves take advantage of them all the time. That we are continuing and expanding the violence cycle. It hurt us a lot to realize this. 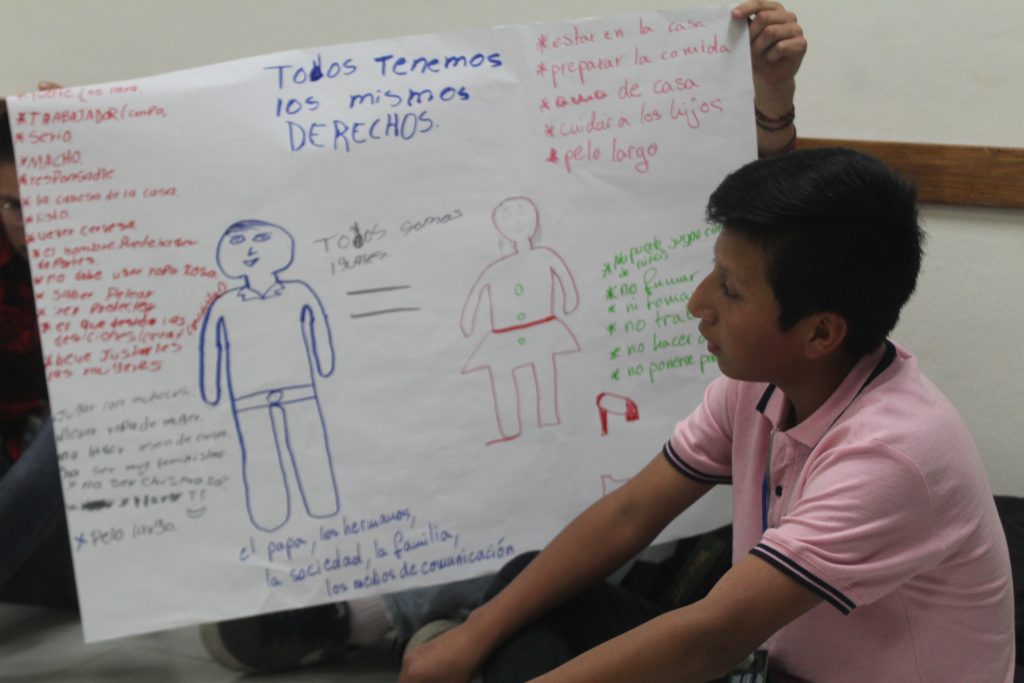 Then at school you make friends, you make jokes … you make yourself comfortable. The truth is that being a man is a powerful sensation sometimes. Although you have to live with a mask.

I always wanted to learn how to dance but I knew I could not say it, because everyone was going to laugh at me. I also remember that my mother told me one day that it was not good for me to have female friends, because I was a man. I did not understand it, but I obeyed her.

We create plays, to remember our worst mistakes as men. It was very moving to see that we caused so much pain and that we had not realized it. Some of us cried and understand that machismo can destroy the life of a person in a minute. We cried because we realized that we feel alone almost all the time. And that we have all been violent and macho, even with the people we love the most.

Now I realize that I can be someone else, that I can be different. In the past I did bad things, to women and to other men, but I do not want those things to continue defining me. It is hard and I know that many people will not understand it, but it is harder to pretend that nothing is happening, and that it is okay to be violent. That it is okay to cause pain. 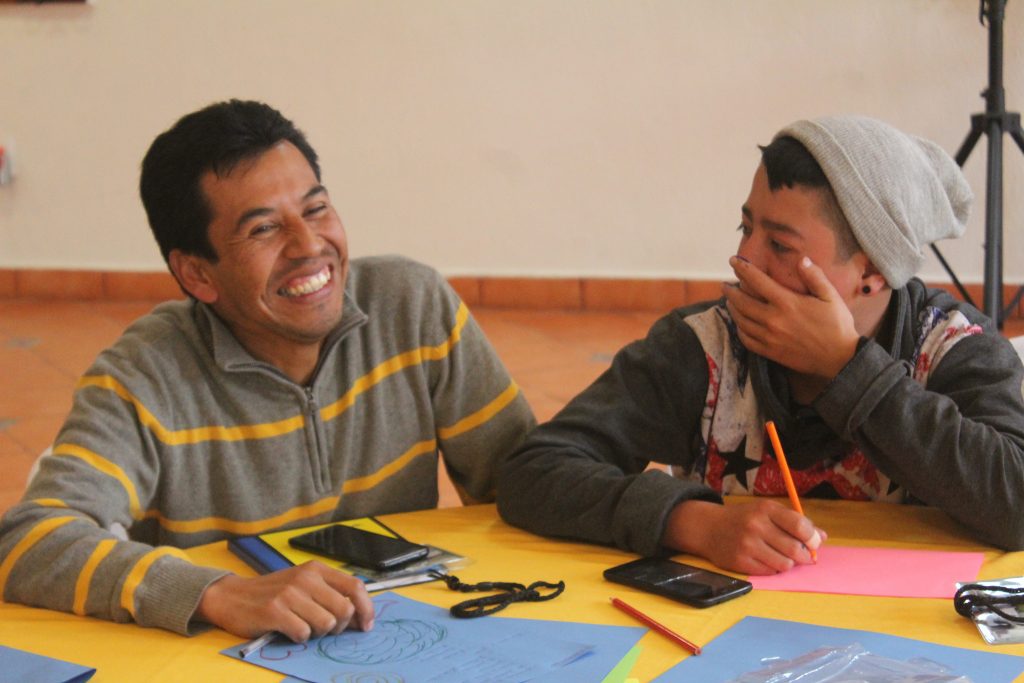 Finally, we look at each other again, we embrace each other again. And we realized that we are not really alone. That we have created something very beautiful and that we can help us change. And we made our Anti-Macho Manifesto. And we promised to collaborate in our homes. To listen to women. To relate better as men. To renounce unfair privileges.

It was a very small first step, but we are moving. Now, we have to continue on this path.

The spark has ignited. 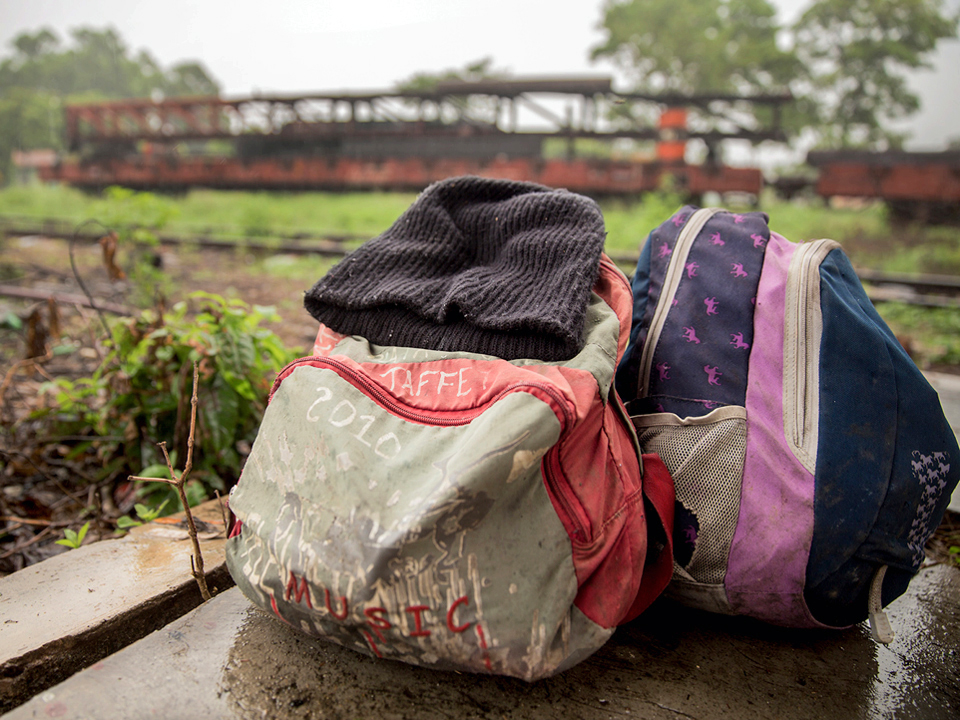 When Everyone talks, but No One Listens: Reflections on the Migrant Caravan
Working with people in the migrant caravan, our partners are doing a revolutionary act: listening.
The Americas

Migrant Youth Speak Out at Transnational Encounter
Hear directly from migrant youth: who they are, why they are here, and what they want us all to know about young people who cross borders and build bridges.
The Americas