Joseph Bednarek, Global Fund for Children’s Senior Director of Global Grantmaking, reflects on a decade of building relationships with partner organizations and supporting grassroots groups in Europe and Eurasia.

I just turned 44. In Texas Hold ‘Em poker, a pair of fours is called “sailboats.” And now it’s been over ten years since I sailed into Global Fund for Children in my early thirties. Looking back, it’s hard to separate my work life at GFC with significant milestones in my personal life. In 2012, I was on a work trip for GFC in Kazakhstan when I had dinner with workshop participants at an outdoor restaurant in the mountains near Almaty. There happened to be a “wishing” stone on the grounds of the restaurant. You know what they say: when in Kazakhstan near a wishing stone…so I figured what the heck and whispered a few things to the stone. The next day my wife called me and told me she was pregnant.

Eight months later, our son Dominic was born. The first day after he was born was exhilarating. The second day was filled with shock and fear, as we learned that Dominic was born with a life-threatening heart condition. For the next two years, we bounced back and forth to the hospital, living there for over two months in 2014. Dominic finally received a new heart on January 15, 2015. 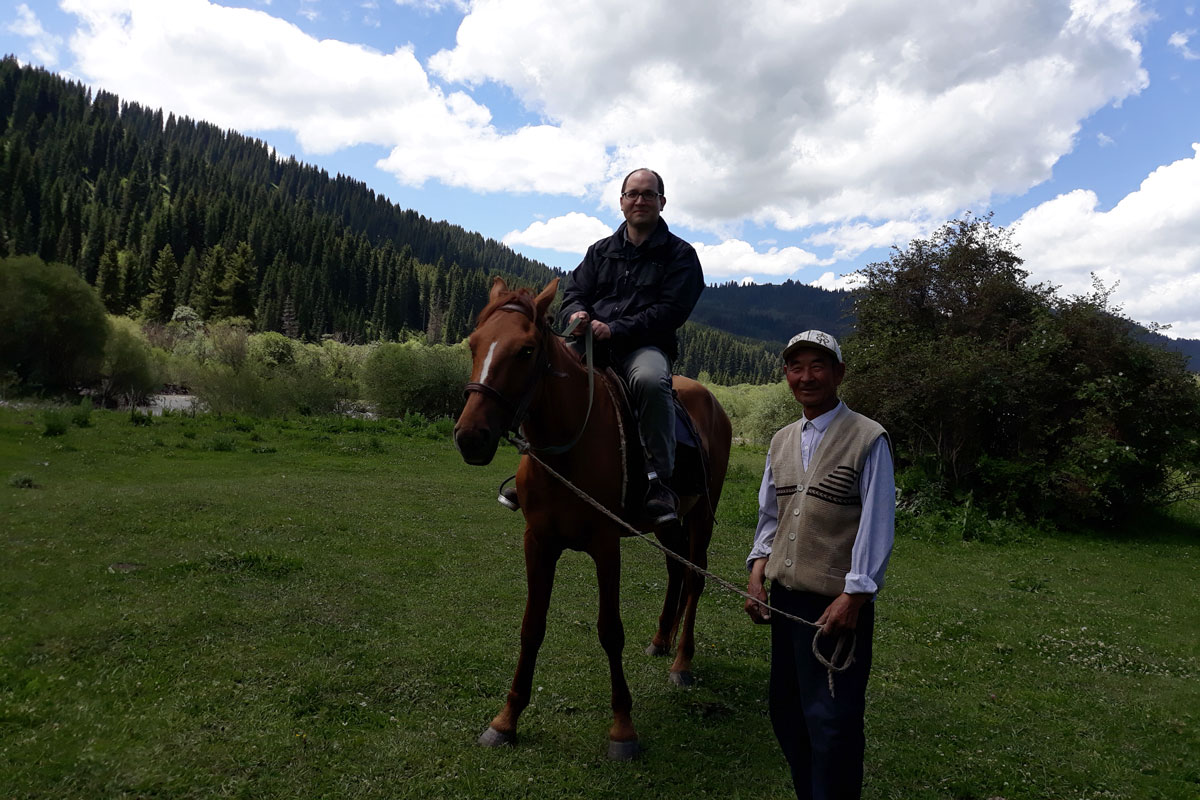 Joe on a horse owned by a Kyrgyz family that was helping with a campsite for Kyrgyz girls living with disabilities.

My colleagues at GFC supported me throughout these stressful years. They brought my family dinner at the hospital and they helped pick me up with encouragement and humor when I arrived at the office many mornings bleary-eyed after long nights at the hospital. One of my colleagues even swapped work duties with me, taking my place on trips and for other management duties for my local partners in Europe and Eurasia.

After more than a year without travel, and with new confidence in Dominic’s health outlook, I went back on the road for GFC in May 2015, travelling again to central Asia. It was hard to leave my family, but I also really missed seeing our local partners in person. By that time, I had been building relationships with them for five years. While in Kyrgyzstan at a visit to our local partner Hand in Hand, I started crying in front of parents and staff as I explained Dominic’s story. I’ve rarely felt more comforted by a group of people – all of the parents there had children with autism, and many of them had been told by indifferent Kyrgyz doctors that their children were “crazy” and had schizophrenia. They were used to crying!

I’ve met youth living with disabilities who used to be nonverbal and are now working at a local market interacting daily with customers. I’ve seen young people who used to run with street gangs become respected leaders in their community. And I’ve talked with teenage moms who were married by force when they were children and who finished school and became public health trainers, educating their communities about reproductive health and human rights.

All of these successes were possible because of the courage and determination of GFC’s local partners around the world. The staff at these small nongovernmental organizations have dedicated themselves to giving back and to helping children and youth overcome often unthinkable challenges to realize their full potential as human beings. It’s been my honor to build relationships and friendships with over 70 nongovernmental organizations in Europe and Eurasia. And I’ve met with hundreds more along the way. 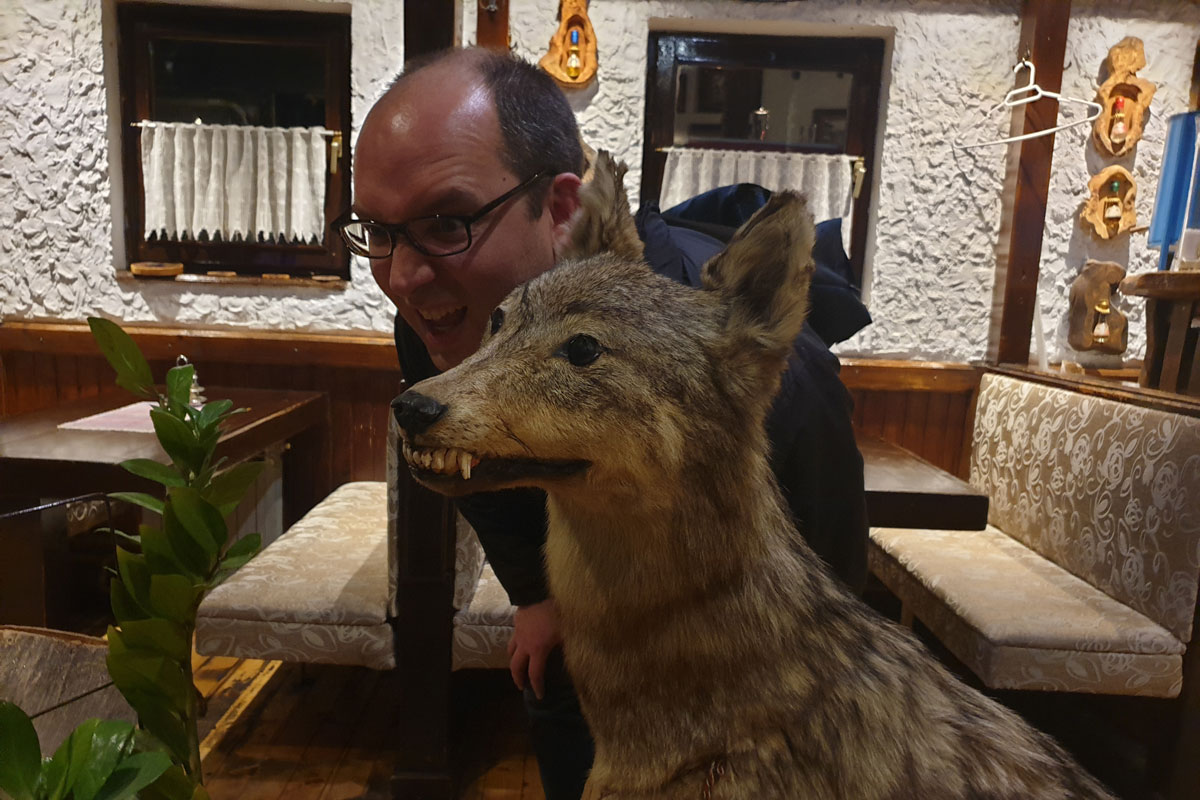 Joe posing with a stuffed wolf in Serbia.

But don’t get me wrong. Working at GFC and with GFC’s local partners isn’t always serious, sad, or inspiring. Sometimes things get strange, and sometimes they are sweet or even ridiculous! One time, I was visiting with a potential partner organization and sitting in a plastic chair when the chair collapsed underneath me, bruising my tailbone. And OF COURSE, the very next day I flew to another city and had a four-hour taxi ride along hilly and pothole-filled roads, which CONSTANTLY caused the old taxi to lift up and slam down.

On another occasion, a local partner insisted that I swim in the world’s second-largest alpine lake and picnic with the staff by the shore after the swim. And I’ll never forget when I arrived at the apartment-turned-office of a potential partner organization for a meeting and a clown in full makeup jumped out from the kitchen. As it turns out, that organization operated a “clown school” for disadvantaged kids.

In the last year, like millions of other people around the world, I’ve worked full-time out of my house. And after eight years in this house, my family and I are about to sail on to a new adventure at a new house to be near my wife’s new office. I’ll be farther away from GFC’s main office in Washington, DC, working remotely permanently. And I know that will sometimes be hard. But I am reminded of what Odin said to Thor in Thor: Ragnarok, “Asgard is not a place, it’s a people.” And for me, GFC will always be the kids, the amazing leaders, and my colleagues. I am happy because wherever I am – whether I’m working at home, visiting the GFC office, or traveling to see local partners in Eurasia – GFC will always mean HOME. 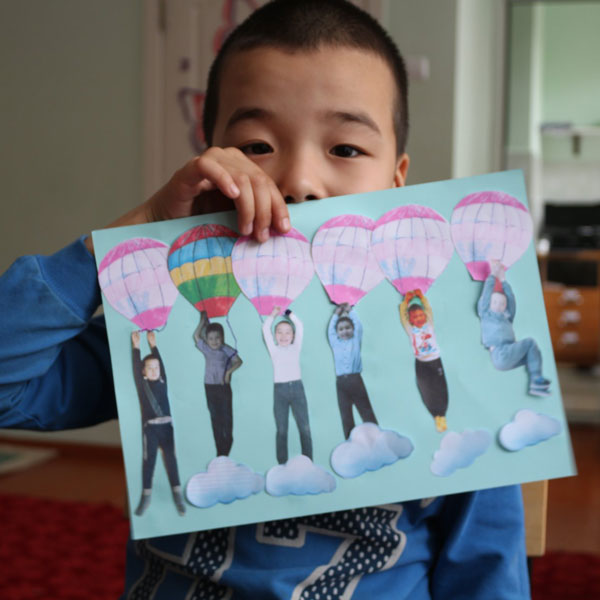 For Kyrgyz children with autism, a local NGO paves the way to better care
When they couldn't find any support services for their children in all of Kyrgyzstan, a group of parents and grandparents created Hand in Hand.
Europe & Eurasia