Grassroots Efforts to Eliminate Violence Against Women and Girls

The newest member of our Africa team reflects on the grassroots movement to eliminate violence against women and girls–and speaks of her own experience as a Congolese woman.

A note to readers: this blog post includes graphic descriptions of the atrocities experienced by women and girls during the Second Congo War.

As the International Day for the Elimination of Violence Against Women approaches, it is vital to reflect on its importance. Designated in 1999 by the United Nations Assembly, the day marks the 1960 brutal killings of the three Mirabal sisters, political activists in the Dominican Republic who were murdered in 1960 by order of Dominican ruler Rafael Trujillo. 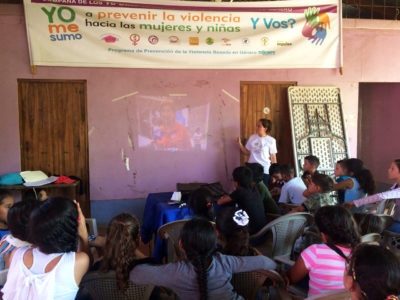 © Global Fund for Children
A class on how to prevent violence against women and girls at a GFC partner organization in Nicaragua.

As a result of this tragedy, each November 25, governments, international organizations, and NGOs organize activities to observe the International Day for the Elimination of Violence Against Women and to raise public awareness of this problem.

Statistics from the United Nations show that an estimated 35 percent of women and girls globally experience violence in the form of female genital mutilation, sex trafficking, forced marriage, or domestic violence. Over 133 million girls and women in Africa and the Middle East are among those composing these staggering statistics, and many of them have been infected with HIV, especially in Africa.

As a Congolese woman, I have experienced many of the atrocities against women that the Second Congo War has brought. This has included home invasions, where rebels ransacked my family home at gunpoint, and just three years ago, an aunt getting violently attacked in front of her children by rebels, who left her face unrecognizable.

The Second Congo War is proving to be the world’s deadliest conflict since World War II, and it is often referred to as Africa’s World War.

According to an Amnesty International report, the tactics used in this conflict include “shifting alliances as needed to achieve economic exploitation.” In addition, disrupting humanitarian aid, stealing, torture, murder, and rape are also other tactics used by the Democratic Forces for the Liberation of Rwanda..

In addition to the mass slaughters, rebel troops incorporated rape and torture as methods of war, targeting women and children. Considered a war within a war, the brutality against women and girls in particular during this conflict reached epidemic proportions. Systematic gang rape, sometimes by as many as 15 to 20 men at a time and committed in full view of family members and friends, is common and is also widely exacerbated by the use of objects such as machetes, knives, bottles, branches, bayonets, and gun barrels. Sexual trauma from such horrific violence includes severe vaginal tearing, prolapsed uteruses, and obstetric fistulas.

Because the country lacks public infrastructure for civilians, casualties of this brutal war do not have access to adequate medical care.

There are only two hospitals in the whole region, and they are barely equipped with the resources to treat such extensive injuries, making it difficult for victims to recover.

Rape is not the only form of attack used against Congo’s civilian population, incidents of cannibalism have also been reported. Victims range in age from infants as young as four months old to elderly women as old as 84, demonstrating the combatant’s complete and utter disregard for other human beings, no matter what their age.

The motives for rape as a weapon of war in Congo vary. After interviewing doctors and medical personnel in the region, a three-week assessment by USAID found that the rationale behind such brutal sexual violence is both complex and individually specific. In general, according to Pratt & Werchick, wartime rape “is done to destroy completely the social, family fabric of society.”

Despite being the backbone of most African rural societies, women are considered inferior and insignificant in every aspect and are made to suffer for the patriarchal frustration of the men in their society. In her essay “Rape and War in the Democratic Republic of Congo,” Erika Carlsen describes the sexual violence in the region as a “by-product of a system of patriarchy where power relations are hierarchal and motivated by masculinity.” She goes on to refer to rape as “an extension of everyday misogyny, a violent enforcement of the patriarchal hierarchy between men and women. This relationship between rape, misogyny, and patriarchy is manifested in the military and its exercise of power.”

As is clear from these references, the cruel sexual viciousness that women are experiencing in the context of this conflict in the Congo does not necessarily have to do with sexual desire. In most instances, it is about power and domination. The rebels experience intense political and economical frustration, as the country’s impoverished state does not allow for adequate income or jobs, and they lash out at society, targeting those less powerful than themselves.

In an effort to combat the effects of violence against women and girls throughout the world, GFC has been committed to assisting grassroots organizations that seek to empower, educate, and provide vocational training to girls who have been affected by conflict.

In 2015 alone, GFC supported 88 grassroots organizations in 35 countries whose programs specifically address the needs of girls. GFC is also a proud member of the With and For Girls Collective. Together with six other grantmaking organizations, GFC has developed a global awards initiative to recognize and reward outstanding, girl-focused grassroots organizations working to ensure that the rights of girls are realized. 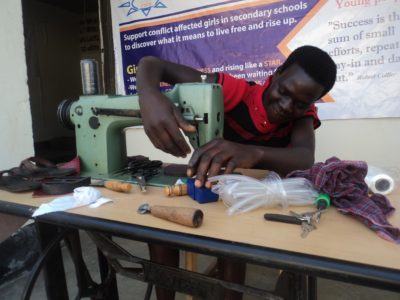 © Global Fund for Children
At Foundation for Inclusive Community Help, young women who were abducted and abused by the Lord’s Resistance Army find new hope through counseling, second-chance education, and job skills training.

In order to embody the true meaning of the International Day for the Elimination of Violence Against Women, this year’s GFC-led Knowledge Exchange in Gulu, Uganda, focused on unlocking the potential of girls in post-conflict environments. The location of the workshop, which took place last month, was particularly symbolic due to the violence experienced by women and girls in Gulu during the Lord’s Resistance Army war from 1986 to 1988. Organized in partnership with the MacArthur Foundation, the convening consisted of peer learning, advocacy workshops, and training from Grant Thornton International on organizational strengthening.

It is with this kind of community engagement that GFC hopes to continue its advocacy and support for vulnerable, conflict-affected girls and women—not just on the International Day for the Elimination of Violence Against Women, but each and every day.