The Women and Girls of Juárez

While scouting for new partners along the US-Mexico border, GFC Program Consultant Rodrigo Barraza García lifts up the forgotten girls and women of Juárez, and the grassroots organizations that are seeding hope in the desert.

Long streets with the desert as the backdrop. Perpetual horizontality. Dust and asphalt that goes on and on for dozens, for hundreds of kilometers.

This is Juárez, sadly famous for two things: for cradling one of today’s most powerful drug cartels, and for the disappearance and systematic murders of thousands of women.

Since 1990, an estimated 1,500+ women have been brutally murdered in this city, one of the most dangerous in the world.

As if it is not worth asking: why?

How to explain the incomprehensible? How to understand the horror? How to make sense of the inhuman?

I can´t explain it. This is all I know:

They were killed for being women.

In this world, being born a woman means living in danger of death. It is a constant, subtle, daily risk. It is the familiarity of fear.

The murderers are all those men who think that a woman can—and should—be his property. Those who start by asking: what was she wearing?

Those who always place a “but” after any feminist claim.

They were killed for being poor.

They killed them because the poor are too many. Nobody looks for the poor. And nobody misses the poor.

They were killed for being girls.

They were killed for growing up before their time.

They were killed for being migrants.

They were killed for living on the border. In limbo. For not having any rights. For being considered criminals.

They were killed for living in a dismembered city. Without ties. Without meaning. City that never was.

They killed them for walking, for not conforming, for dreaming about something else, for transgressing.

They killed them because nobody knew them. Because this city denied, killed, and buried them.  And nobody claimed them. 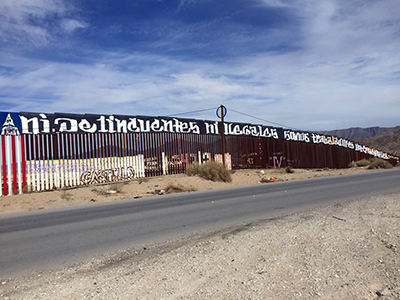 And still, humanity persists. While scouting new partnerships for Global Fund for Children, these are the courageous organizations I encountered:

Together with the Family Network of Survivors of Torture and Disappearance, they seek to (re) build the memory of Juárez in terms of justice and community.

Walking and learning. Together. For them, truth is a political process that allows transforming pain into life and hope.

There they go, walking, shouting, risking their lives. They remind us of the names and faces of those who were taken away. Combating erasure with rebirth, violence with art, indifference with organization and community work.

The Hope Border Institute, located in El Paso, Texas, works for justice using the social doctrine of the Catholic Church.

They work directly with the young migrants to build hope. Through research and advocacy, they build bridges of understanding across different people, religions, ideas, groups. It is the principle of equality in difference. It is the power of the encounter.

Responsibility and transparency. Respect for human rights. An end to the dissuasion and mass deportation of asylum seekers. An end to family separation. Compliance with due process mechanisms. These are some of their demands.

The Center for Integral Human Rights in Action A.C. works with the invisible, with those who are not named.

From the communities to the transnational level. Dynamizing strategic litigation cases that cross borders. Working in the neighborhoods, in the houses, in the communities. Defending the right to be, to exist, to dissent.

It’s hard to keep hope in this cemetery city. These organizations don’t just keep it. They build it and (re) invent it every day.

And then there are the girls, showing the way.

A girl, inspiring her parents, her grandparents, her sisters, her daughters, her neighbors, her friends. Giving. Protecting. Caring.

Sowing this desert with hope.