The Man with the Plan

At a sports club in Turkey, children of different abilities and backgrounds come together for something that all kids need: the chance to play.

When I first met Celal Karadogan, I was impressed by his enthusiasm for his work and by all that he had already achieved. Along with a team of volunteers, Celal had cleared a local park in Adana of drug dealers and criminals and had created a safe place where children from the neighborhood could play. Not only that, the park became a special place in the city where children with disabilities played and competed in sports with kids without disabilities.

But Young Disabled Sports Club, the organization that Celal leads, wasn’t satisfied with these accomplishments. At our initial meeting in 2012, Celal told me that the organization needed a bigger center next to the park and that he would work with the local authorities to try to get it.

Young Disabled Sports Club became a GFC grassroots partner in spring 2013. In 2014, after a long process of negotiating and working with the local authorities, a new center next to the park opened. 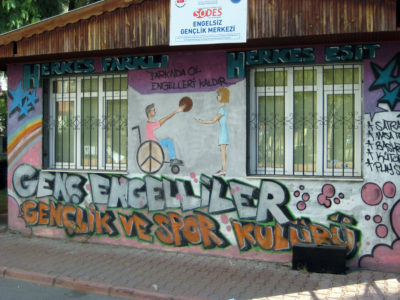 © The Global Fund for Children
Outside the sports center, which Celal secured for his organization 2014.

Since our first meeting, many things have changed for Celal and Young Disabled Sports Club. With the help of GFC, Celal successfully applied for an Ashoka Fellowship. Celal was already a “big ideas” guy before being an Ashoka fellow, but the fellowship introduced him to other inspiring leaders, and he recognized himself more clearly as a social entrepreneur in Turkish society. He improved his English language skills and increased his confidence in his organization’s ability to generate an idea, draft a realistic plan, and work to make that concept a reality.

Celal needed that increased confidence to deal with a new test in his community. Over the past four years, the number of refugees fleeing the war in Syria and coming to Turkey kept increasing.

Adana, Celal’s home city of around 2 million people, is now home to an estimated 200,000 Syrian refugees.

Among the refugee population are many children living with disabilities—including an estimated 100 children who had limbs amputated after being injured by Russian or Syrian Air Force bombs. After many of these children arrived in Turkey, the local government turned to Celal and his organization because no one else had their level of experience and success working with kids with disabilities. 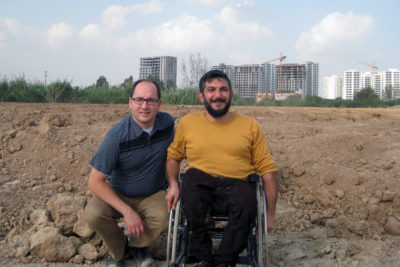 © The Global Fund for Children
Joseph Bednarek poses with Celal in front of the land that will become a soccer field for the new center. The groundbreaking ceremony takes place December 3.

Celal and Young Disabled Sports Club have taken on this challenge, which has stretched their limited human and financial resources. Undeterred, Celal has continued to develop his big ideas for how to best help Turkish and Syrian children. He recently gave a presentation at an Ashoka conference in Istanbul that happened to be attended by a member of the local Adana government. This official had never met Celal before but was drawn in by his presentation and sought him out after the speech. The official asked him how he had accomplished all these things while being in a wheelchair (Celal was a Turkish paralympian in several sports) and what his ideas were for helping the children of Adana.

Celal, with years of experience and the confidence gained during his Ashoka Fellowship, explained his idea: a new center for sports for children in the city.

The youth sports center would be open to everyone: kids with or without disabilities, Turkish kids, Syrian kids, and their families. There would be soccer fields, a bungee jumping tower, a water park, and rehabilitation equipment.

Having some experience with such deals, Celal convinced city officials that this center would actually increase the property values of the apartment buildings that would eventually surround it. New residents would be attracted to a modern sports center in the heart of their neighborhood.

The city officials discussed the idea and offered Young Disabled Sports Club an amazing deal: 30,000 square meters on the edge of a new district in Adana, and a 30-year, rent-free lease for the land. The lease was signed. A volunteer architect drew up the plans. And on December 3, the International Day of Persons with Disabilities, the groundbreaking ceremony for the center will take place.