Holding on to hope at the Serbian border

Conditions are worsening for asylum seekers traveling through Serbia. Joseph Bednarek, GFC’s Director of Global Grantmaking, witnessed firsthand the struggles of young migrants – and how Asylum Protection Center works to give them safety and hope.

In 2015, millions of Syrians fled their country’s civil war. Most of them traveled through Turkey, Greece, Macedonia, Serbia, and then finally to Croatia and beyond to their relatives already living in central and northern Europe.

The massive numbers of people on the move overwhelmed the capacity of country governments and NGOs. Meanwhile, images of dead migrants washing up on Aegean beaches captured the attention of the world. In early 2016, under pressure from destination countries and its own government, Croatia closed its border, announcing that the so-called “Western Balkan” route was blocked.

The flow of migrants from Syria decreased dramatically. And the world moved on to other stories.

But migration to northern and central Europe did not stop. There was no break for the governments and NGOs of Turkey, Greece, Macedonia, Serbia, and Croatia.

Even before the Syrian migration crisis began, GFC partner Asylum Protection Center (APC) was there to help migrants. They were there during the height of the crisis, and they are still there now, trying to help the thousands of migrants that are still passing through Serbia as they try to enter European Union members Croatia or Hungary.

The migrants come from Afghanistan, Pakistan, Iran, Iraq, Somalia, Libya, and Syria. And conditions have worsened. At the height of the crisis, trains and buses of migrants were loaded up at the Macedonian and Serbian border and transported across Serbia to the Croatian border, where most migrants were lucky enough to get on a bus or train into Croatia and entry into the EU. 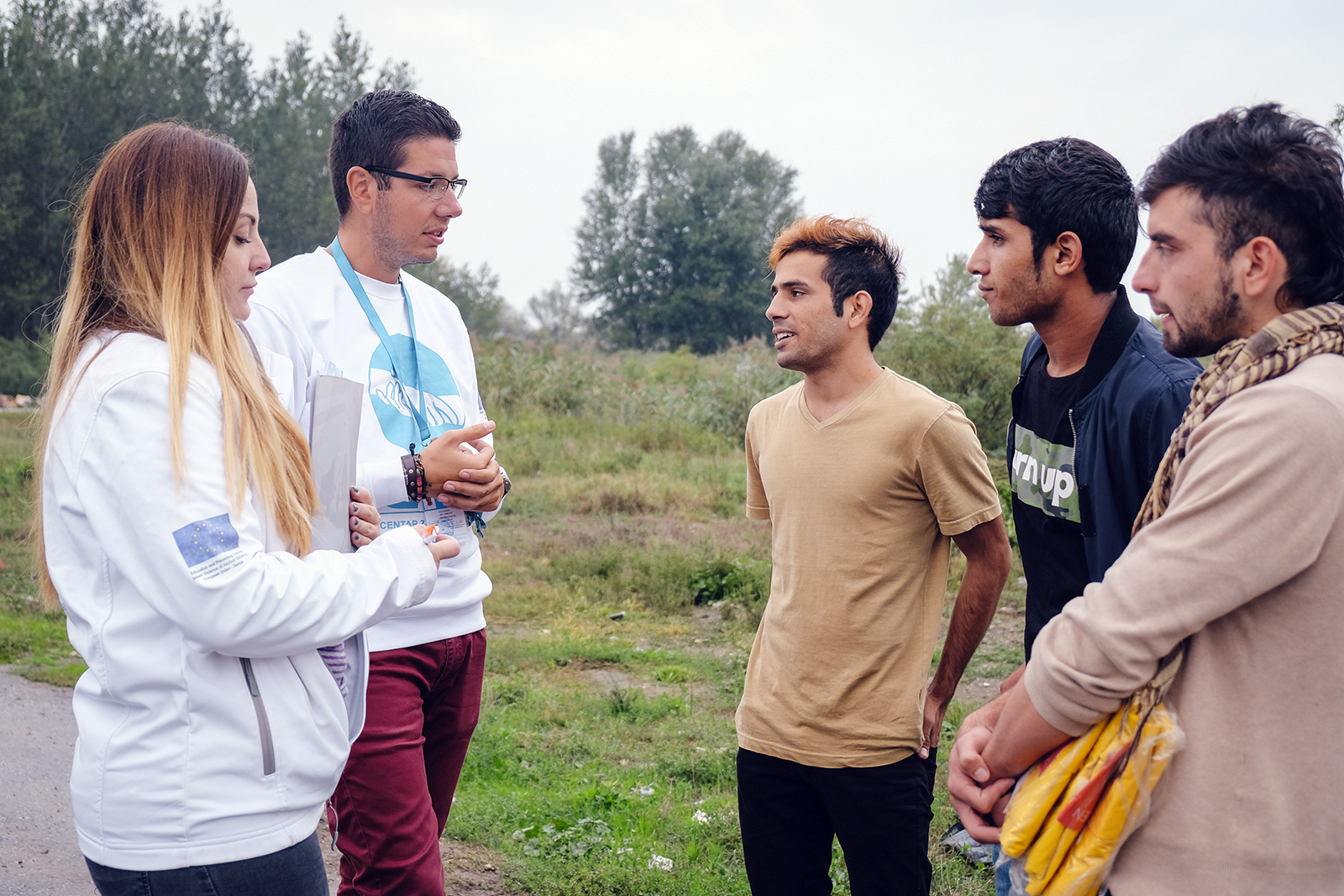 Near a refugee center in the Krnjača neighborhood of Belgrade, Serbia, APC staff provide young refugees with emergency supplies and inform them about their rights. © Petar Markovic. Photo taken in September 2017.

With the attention of the international community turned elsewhere, though, harassment is on the rise. Government officials from Serbia, Macedonia, Croatia, and Hungary are treating migrants poorly to discourage them from crossing into their countries.

Smuggling has come back as a huge industry, run by criminal gangs and corrupting local officials in their schemes. The smugglers prey on the migrant’s lack of information and inability to speak the local languages. They promise passage to Croatia or Hungary. But Hungary’s border is now entirely ringed with barbed wire and electric fences. If migrants are lucky enough to have money to bribe border officials or use smuggler assistance to get them through tunnels under the fences, they still have to face interior ministry troops and dogs roaming the border zones to beat, bite, and push them back.

It’s November 13, and I am near the Hungary-Serbia border in the city of Subotica, Serbia. Hundreds of migrants are living in wretched conditions in abandoned buildings near the train station. Winter is approaching, but I notice most migrants have only light jackets and no socks. Many wear only sandals. Trash is everywhere.

I have come to the site with Asylum Protection Center’s mobile northern team, which has been visiting this site for years. On this day, one of the young migrants, maybe 18 or 19 years old, recognizes the white APC jackets and starts telling the APC team what happened to him and his friends the previous night when they tried to cross the Hungarian border.

This young man and 20–30 other migrants had attached themselves to the bottom of Serbian trains headed across the border. If a migrant can’t hang on for the 40-minute trip from the Serbian station to the Hungarian station and they fall from the train, they will likely lose limbs, fingers, or their lives.

This young man completed the short trip but was discovered by the Hungarian border police, as almost all of the migrants using this method are caught. He was handcuffed and thrown into a garage with 30–40 other migrants. The police took their food, water, money, and extra clothes and left them there for hours without water or toilet access. 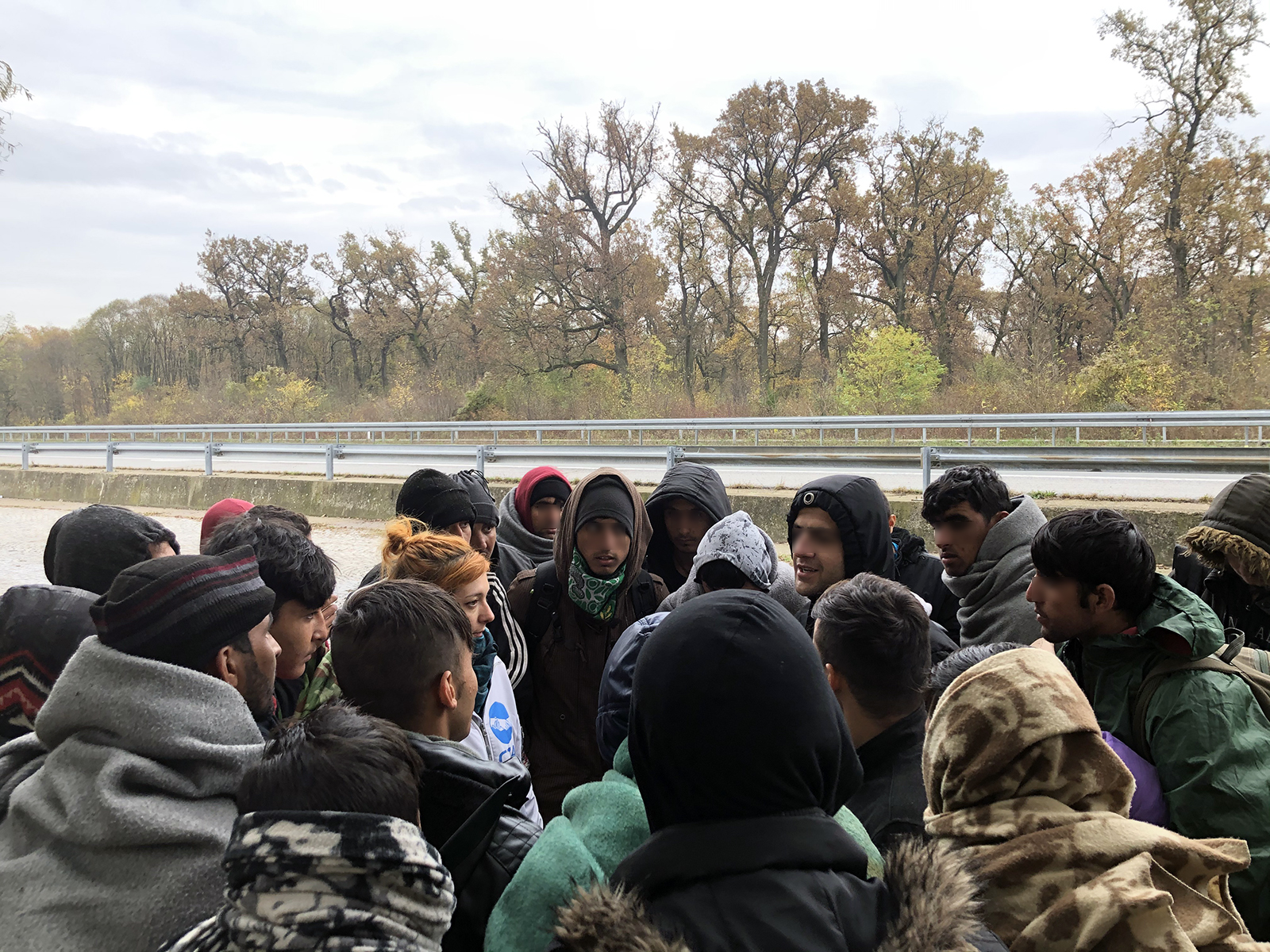 One of this young man’s friends was beaten on his face, making a bloody wound above this eye. After a few hours, with the police periodically beating them along the way, the migrants were taken to the Serbian border. The Hungarian police opened the gate and shoved them back into Serbia – and now he’s here in Subotica, talking to me and APC.

Many in the makeshift site in Subotica have tried to cross the border several times. Among this group are several males who definitely look younger than 18, meaning they are unaccompanied minors. According to Serbian law, unaccompanied minors are allowed to be immediately registered and placed in camps or group homes where there is hot water, food, and beds. They are entitled to assistance from social workers and legal assistance, often provided by APC.

But teenage boys don’t know this process exists. APC’s mobile teams are very familiar with the game that is being played when they approach groups of migrants sheltering in makeshift buildings. APC staff ask each of the young-ish looking boys how old they are. They say “18” or “20.” And smile. Then another young man approaches and says that this boy is their cousin, or brother. “What proof do you have of this?” the APC staff asks. Everyone smiles.

But the APC staff are persistent. On this particular visit to the makeshift camp at the Subotica train station, we see some young-looking boys run into a building as we approach. We overhear some older men telling other boys not to talk to the APC staff.

The APC staff try to talk to them anyway. They talk to all the migrants, telling them that if they register with the police, they can go to a camp where they will have shelter and food. But the smugglers’ helpers are hovering around, intimidating the group.

On this overcast and gloomy day, we meet at least 50 migrants waiting around an official Serbian refugee camp. But they can’t get in. They are told by Serbian officials that they can apply for entry to the camp, but APC knows this isn’t a guarantee, and tries to tell the migrants not to put much faith in this outcome.

APC repeats again and again to small groups of migrants that the best thing to do is register with the police so that they can go to a Serbian government camp, get clothed and fed, rest up, and then decide what action to take next. 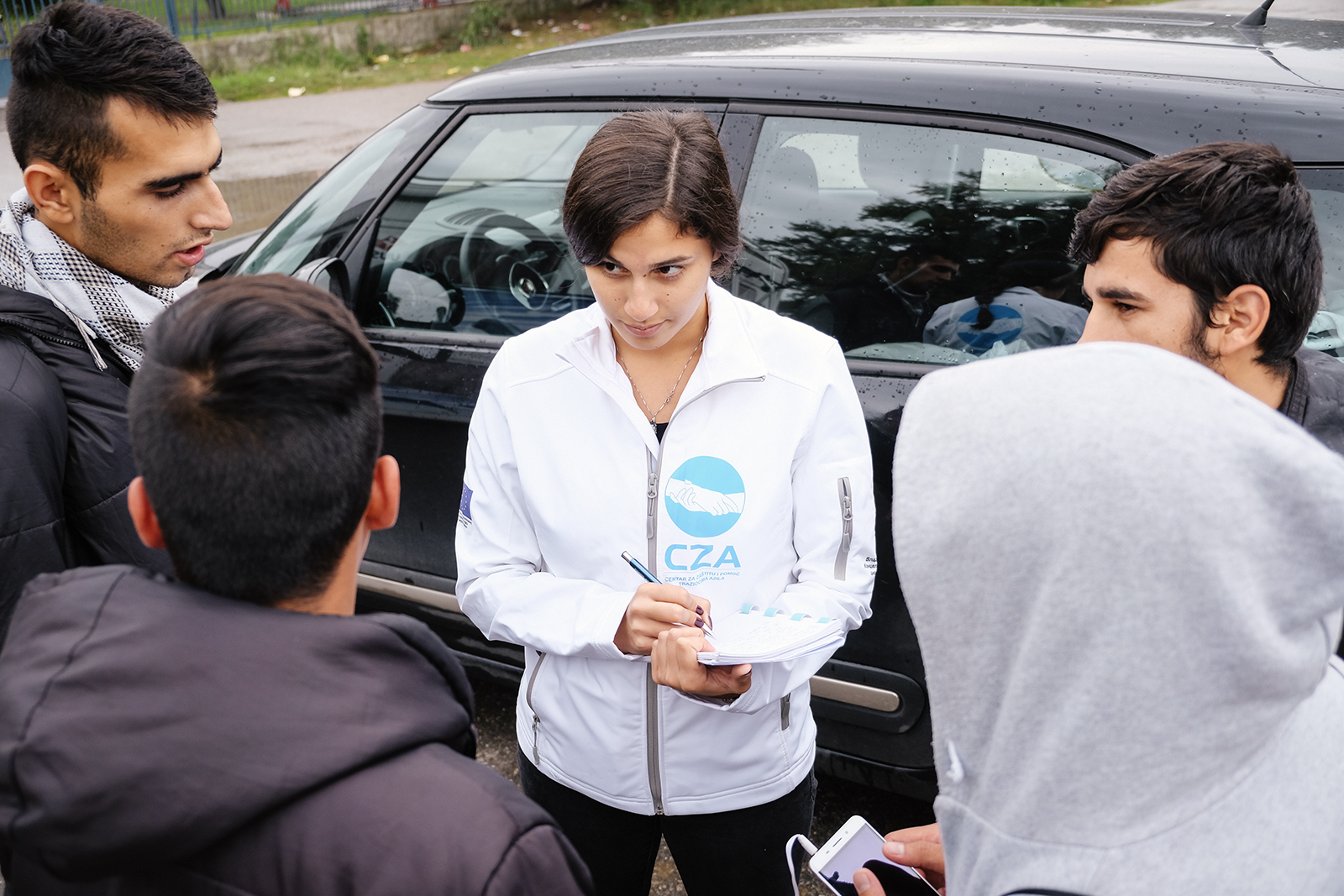 Near a refugee center in the Krnjača neighborhood of Belgrade, Serbia, APC staff provide young refugees with emergency supplies and inform them about their rights. © Petar Markovic. Photo taken in September 2017.

But the migrants are desperate. They tell us they have made several attempts and have no money and don’t want to “go backwards” to camps in the interior of Serbia. They have made it this far … they want to keep moving forward, not back. Their relatives back home and in destination countries are counting on them. And they have already made arrangements with smugglers. “Go back to Belgrade?” they ask. “No, no.” They still have hope that they will make it all the way.

Among this group are many boys. The APC staff I am with have been working in these conditions for years. They know that the group is trying to hide the minors and keep them in the smugglers’ networks.

The boys aren’t aware they have rights until APC staff tell them so. APC mobile team leader Jana Stojanovic keeps talking to the handful of unaccompanied minors trying to stay with the big group. She makes a call to the Serbian Center for Social Work, which is supposed to come and take unaccompanied minors to safe houses, shelters, or asylum or transit camps.

Jana tells three or four teenagers that the social workers will be coming in the afternoon to get them. “If they don’t,” she says, “call me on this number.” She hands them the number for her work mobile phone. She still has hope that these boys will make it out of the cold and into a warm home.

The next day, Jana calls us to say that she is back at the site on the Croatian border. The teenage boys are still there, but the social workers never showed up. Jovana Vincic, another APC program manager, calls the local Center for Social Work and ends up talking to the director of the center himself. The director agrees that he will drive out in his own car and pick the boys up and drive them back to the safe house.

It’s nighttime now. The APC staff have talked to over a hundred migrants in the past two days, and none of the older males seemed interested APC’s advice to register and go to the camps. But two teenage boys are going to eat a hot meal for dinner and spend the night in bed under a blanket with a toilet nearby. The APC team is tired. But there are two more boys who have a chance to reach safety and shelter and to plan for the future. The APC team will wake up the next day and go back to the border camps, because there is always hope. 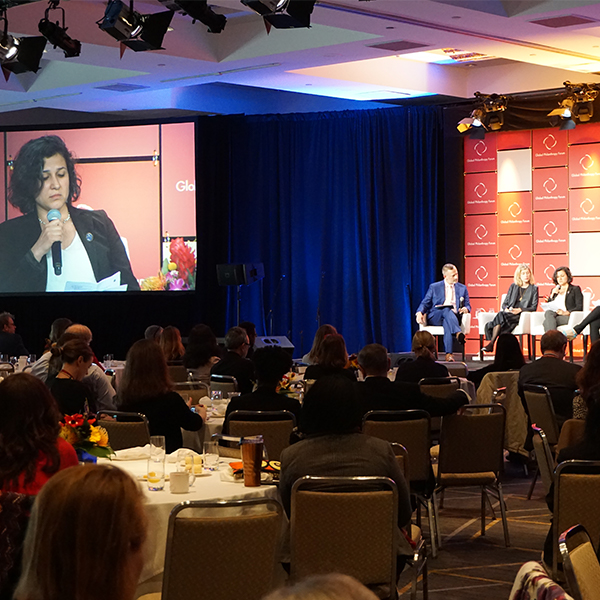 Innovative education for child refugees in Turkey
In a world too often characterized by political, ethnic, and cultural division, one organization in Turkey is bringing children and families from diverse backgrounds together.
Europe & Eurasia