My name is Gerardo López

Editor’s note: This post is also available in Spanish.

Gerardo left El Salvador at 17, embarking on a dangerous journey to join his mom in the United States. Now he works at GFC’s partner Homies Unidos, mentoring youth who have faced similar challenges. In his words, this is his story.

My name is Gerardo López.
I’m from El Salvador,
and this is my story.

When I was seven, my mom made the toughest decision of her life. She decided to leave for the United States, in search of a better life for my sister and me. She dropped my sister off with our grandmother, and me with our aunt, and left. Six months passed before I heard from my mom again.

When we learned she finally made it Los Angeles, everything began to change – but not for the better. I thought to myself, “Now I’ll be able to play like all the other kids my age.” I was wrong. My aunt began to put restrictions on me. Suddenly, I wasn’t allowed to go to school, and was forced to work.

I was seven when I was forced to work the job of a grown man out in the fields.

Even though my mom was steadily sending my aunt money, the restrictions became more and more cruel. Meals turned into scraps, fresh clothes and showers became a luxury, and my body became marked with bruises and scars. One day, returning from a day’s work in the fields, I came home to find my aunt talking with a social worker. I was paralyzed with fear and could see in my aunt’s eyes what would happen if I shared what was actually going on in that house ­– so I didn’t say anything.

The once calm and loving environment became violent and volatile. By the time I was nine, I left my aunt’s home, for good. To this day, I still have the scars from her physical and mental abuse.

For the next seven years, I lived on the streets of one of the most dangerous countries in the world. I resented my mom and family, so I completely cut ties with them. I slept on the streets rain or shine, rarely had food in my stomach, and tried to keep my head low and away from gang violence.

I tried to attend open classrooms, but only made it to the seventh grade, because I had to spend all of my time simply surviving. I was homeless and alone. El Salvador viewed me as trash, a thief, a criminal – so I was treated like one.

I was finally able to get a bit of happiness with my mom’s support.

My mom asked me: “Do you want to come here?”

It was March 2015 when, without hesitation, I decided to follow my mom to the United States.

A couple of months short of my 18th birthday, I left El Salvador. The trip was smooth until we arrived at the border between Guatemala and Mexico. An entire month passed before we were able to cross into the country.

At a migration checkpoint, the password our coyote gave us failed. To continue, we had to pay an additional 1,500 pesos per person, or else we would be deported. None of us had that kind of money. As a group of ten, we were able to come up with 1,600 pesos.

They let us continue.

On a bus heading towards Reynosa, Mexico, we were captured and kidnapped. Two young members of the Gulf Cartel forced themselves onto the bus, covered our heads with bags, and demanded that we get off.

“Nothing will happen to you. We are here to get the people who already paid the immigration officials. We can do this either the good way or the bad way, you decide.”

One by one, we got off the bus.

They packed us into another truck and took us to an abandoned warehouse. There were probably 75 other hostages ­– old and young, male and female, even small children. To survive, you either had to pay for your freedom, or work until you had the money they demanded. For most of us, this was either a dead end or literal death.

Two weeks later, Mexican marines and police busted our captors. Once again, we were loaded onto a truck, and we truly believed we were safe. Not even half an hour later, we pulled into a dark, reclusive alley … just to be handed back to our original captors.

Eventually these captors released me. For whatever reason, they liked me – and that made me a lucky one.

I was crossing a river in McAllen, Texas, when I was caught by US immigration officials. This was my introduction to an ICE detention center. I was fed, bathed, and told to wait until they were able to get in touch with my mom. In the back of my mind, I knew I was turning 18 soon … and that made very nervous.

Two lawyers from an organization called ProBAR wanted to help me. They wanted to hear my story and see if I could potentially qualify for political asylum.

I was hesitant to share my story with them.

I thought they would laugh.

I though they wouldn’t believe me.

I thought they didn’t actually care about what happened to me.

Finally, I spoke my truth. Again.

Gerardo was finally reunited with his mom after a decade of separation. He now lives in Los Angeles, California, and works at Homies Unidos. The nonprofit works to end violence and promote peace in immigrant communities through gang prevention, the promotion of human rights, and the empowerment of youth and families in El Salvador and Los Angeles.

Homies Unidos is one of Global Fund for Children’s local partners and a member of GFC’s transnational network of community-based organizations serving adolescent migrant girls. Homies Unidos’ hope is to achieve the full potential of immigrant communities to create a just, safe, and healthy society for all.

The right to be and belong
At a recent partner convening, a transnational network of community-based organizations from Guatemala, Mexico, and the United States came together to write a video message to migrant girls to tell them know they are not alone, they matter, and the world needs them.
The Americas 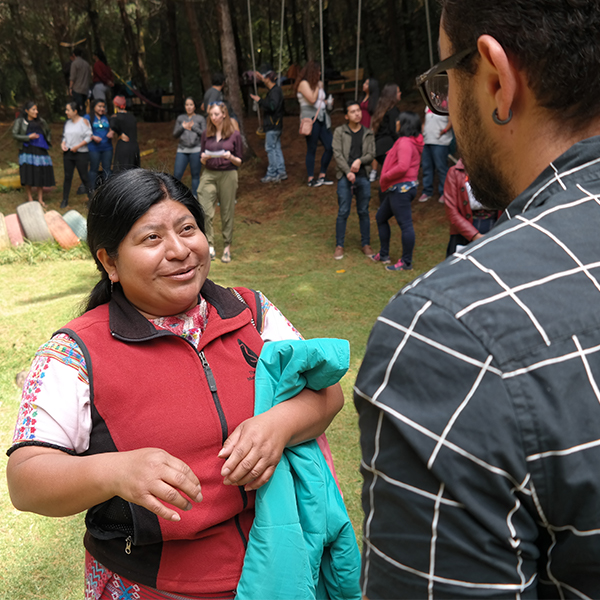