Whether empowering young refugees to rebuild their lives or helping children with disabilities go to school, we provide critical care to children and youth who are often overlooked.

Stretching from the United Kingdom in the west to Kyrgyzstan in the east, this vast and diverse region is grappling with long-term challenges related to the refugee crisis, corruption, and deep poverty.

In southeastern Europe and many former Soviet republics, government services remain severely underfunded, particularly for orphans, Roma children, and children with disabilities. And though the refugee crisis has faded from the headlines, it continues to have long-term effects as young people seek safety and a new beginning in the region.

Working to fill the gaps, our community-based partners provide critical services – like shelter, healthcare, and education – to children and youth who would otherwise be forgotten. They also open doors to entrepreneurship, civic engagement, and other opportunities that enable young people, particularly girls and young women, to contribute to and help shape the world around them.

But our partners cannot face these challenges or leverage these opportunities alone: they need you. Your help brings safety and opportunity to thousands of children across Europe and Eurasia. Learn more in our GFC in Europe & Eurasia Overview.

Back to All Regions

Back to All Regions 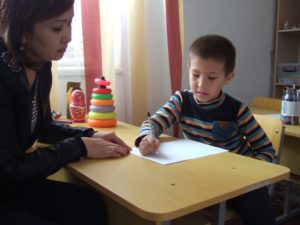 In Kyrgyzstan, as in much of the developing world, many doctors misdiagnose children with autism spectrum disorder (ASD) as schizophrenic. Parents, with nowhere to turn for help, isolate their children at home or even abandon them. As a result, thousands of children with ASD miss out on early medical and educational interventions that could lay the foundation for an independent future.

Working within this environment is Hand in Hand, the first and only organization in Kyrgyzstan devoted entirely to assisting children with ASD. At Hand in Hand’s center, each child has an individualized education plan and works with a team of speech pathologists, music therapists, psychologists, and behavioral therapists, who together empower the child to meet his or her personal needs and goals.

Hand in Hand also educates parents about the condition and trains healthcare professionals to identify ASD and refer children for proper care. These are critical steps in making sure children with ASD get the support they need to reach their full potential.

For Orphans, By Orphans: Finding Community with Each Other

As in several other former Soviet countries, orphans in Ukraine “graduate” from government orphanages as early as age 16. Young, alone, and lacking skills or support, they are often ill prepared to lead independent lives – and are especially vulnerable to exploitation and abuse. 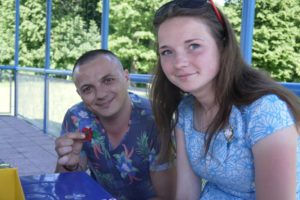 Led by young people who grew up in Ukraine’s government-run orphanages, Orphan’s Future equips young orphans with skills, networks, and financial support so that they can lead productive, healthy lives. Older children who are in their last few years at the orphanages receive training in life skills such as how to cook for themselves, make a personal budget, create a resume, and navigate the city’s public transportation. Graduates have access to the organization’s information resource center, which provides English lessons, computer classes, counseling, and a variety of other services.

Orphan’s Future also works closely with local orphanages to help youth get into universities or vocational schools and transition to living on their own in apartments. Finally, at annual summer camps, young orphans have the opportunity to meet older role models, in addition to playing games and making friends – things that every child should have the chance to do.

Building Skills for a Brighter Future

Tower Hamlets is one of the poorest boroughs in London and has one of the city’s highest rates of youth unemployment. Trapped in the cycle of intergenerational poverty, young people struggle to gain equal access to education and employment. 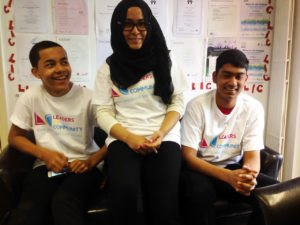 Responding to these needs, Leaders in Community (LiC) runs a variety of programs to help children and youth build skills, engage with their community, and develop positive support systems that can improve their lives. These kids are in desperate need of support: 65% of the children and youth who come to LiC are out of school, unemployed, and not enrolled in any kind of training program. LiC’s flagship employment program helps young people with resume writing and interview skills, connects them with apprenticeships, and provides one-on-one mentoring and work placement – preparing them to succeed in their future careers, and in life.

The organization’s other programs include support for young people’s start-ups; violin, guitar, and dance lessons for younger children; sports; and a community garden.

Founded and led by LGBTQ activists, Bishkek Feminist Initiatives (BFI) is breaking new ground in advancing gender equality in Kyrgyzstan. BFI works with children and youth who are most at risk of gender-based violence and discrimination – including girls in danger of being kidnapped for marriage, young people living with HIV, and queer and transgender youth. 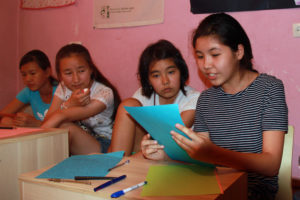 A community house serves both as BFI’s headquarters and as a short-term shelter for youth who are fleeing violence or persecution and have nowhere else to turn. BFI provides these youth and others with peer counseling to help them work through their trauma and the challenges they face in their daily lives.

The organization also hosts several support groups, including a feminist parent-and-child club and the Teenage Youth for Justice and Equality club, which is for teens of all genders. Its Girl Activists club, led by teen girls, empowers girls to document and tell their stories through art, blogs, comic books, and videos. The Girl Activists also organize camps for girls from all over Kyrgyzstan on issues that advance gender equality, including sexual and reproductive health and rights, education, and girl power.